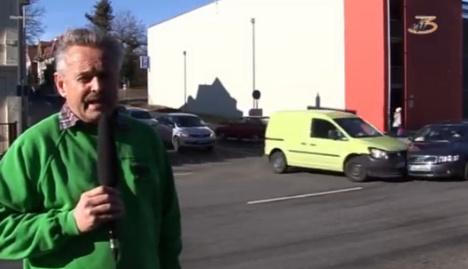 Werner Helfen, as the cars crash behind him. Photo: Youtube screenshot.

During the very first broadcast of “Werner Kann Helfen”, a show investigating accident blackspots in the small town of Freiberg, two cars crashed into each other just behind Werner Helfen as he spoke to the camera.

Driving instructor and part-time journalist, Helfen was at that moment chatting about the particularly difficult junction, when, almost on cue, a car pulled out too far and was hit by a vehicle coming the other way.

Helfen hardly blinked, remained calm and finished his evaluation, assuring viewers that the collision had not been staged.

“We had no idea it was going to happen,” Helfen told The Local. “It was unlucky, but it happened and there wasn’t much we could have done.”

The camera team caught Tuesday's incident on film, but the crew paused the recording for a few minutes while they made sure that the area was safe and that no-one was hurt. The programme was then edited and was broadcast on Thursday.

The 56-year-old has drawn admiration from viewers for his composure in front of the camera. But, he explained, car accidents were part of his day-to-day.

“Car accidents happen all the time. Perhaps I’m just used to it. But it’s nothing particularly unusual," he said.

The video has now been seen more than 750,000 times and has been reported by all major German news organizations.

“We never thought it would get that reaction,” Helfen said. “It has got a lot of attention”.

Some viewers had their suspicions. Helfen received one email from a local resident, accusing him of staging the accident – which he said was out of the question.

“Those were expensive cars. I don’t have the money to build a vehicle for that purpose,” Helfen said in response.

For eff 3, the tiny local TV station that broadcasts the show, the clip has brought a welcome surge of interest. Average viewing figures barely get above 15,000 since the programmes are only available online or on cable.

Already a familiar face in Freiberg, Saxony, Helfen is also running for the local town council. He hopes to represent motorists and pedestrians and work on traffic issues in the 40,000-person town.

And his celebrity status might well help his political campaign. While talking to The Local while parked in his car, Helfen said a man drove past giving him the thumbs-up.

“He must have seen the video,” Helfen added, laughing.

Since the incident, Helfen has been flooded with calls from the media and is set to appear on German channel RTL to be interviewed about the incident.