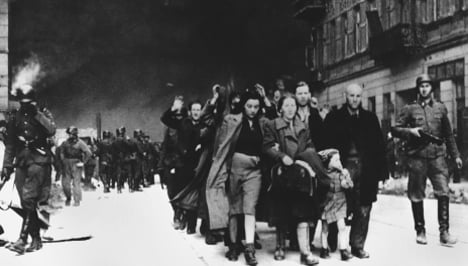 Jews being led out of the Warsaw ghetto by SS troops in 1943. Photo: DPA/CAF

A proposal to improve the current law on such pensions was presented to an Israeli delegation in Berlin some two weeks ago by deputy labour minister Jörg Asmussen, Spiegel said in a report published on Monday.

A law introduced in 2002 allowed Jews who worked in the Nazi-era ghettos to claim a pension from Germany, with payments starting from 1997, but only if they had worked "voluntarily" and "in return for remuneration".
Jews who were forced to work in the ghettos at the time were subject to a separate compensation scheme.
But ghetto workers who applied for a pension after 1997 are only legally entitled to retroactive payments going back four years, a stipulation the German government now wants to change to grant all claimants the same pension rights dating back to 1997, Spiegel said.
Quoting figures from the Israeli government, Spiegel said the modified legislation would see around 13,000 survivors living in Israel receive an average of €15,000 each in outstanding payments.
The Nazis established hundreds of ghettos to isolate Jewish communities.
Many were used as transit camps for Jews before they were sent to concentration camps.
READ MORE: Germany commemorates victims of Nazism