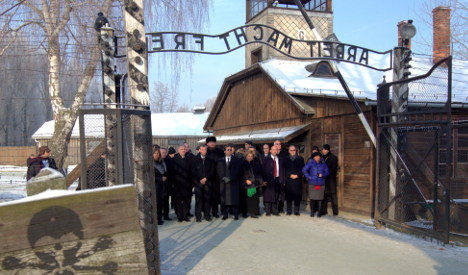 The delegation at Auschwitz on Monday. Photo: DPA

After an hour of remembrance in the Bundestag, participants in the international youth congress – which takes place every year in memory of the victims of the Nazi regime – met for a discussion with 95-year-old Russian author Daniil Granin, who survived the siege of Leningrad in 1944, and Bundestag president Norbert Lammert. "Germany is aware of its historical responsibility for the harm that was done to the inhabitants of Leningrad,” he wrote. “I say to you and your people – we share the pain of the victims and we feel with the survivors who still suffer from the consequences of war.”