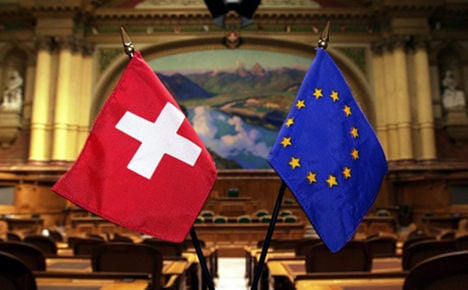 Switzerland is ringed by EU member countries and does the bulk of its trade with the 28-nation bloc, but has remained steadfast about not becoming a member. The European Commission said it would re-assess EU ties with Switzerland, raising the prospect of reduced trade.

Germany's anti-EU party Alternative für Deutschland (AfD) picked up the baton on Monday and called for a similar law in Germany.

"Independent of the content of the Swiss referendum, we should also create an immigration law in Germany which is based on the qualifications and integration abilities of the immigrants, and effectively prevents immigration into our social support systems," Bernd Lucke, AfD leader said.

Der Spiegel magazine reported that Lucke proposed referendums as a way to get around the political parties in power who he said were ignoring what he said was a problem.

"If necessary, referendums should be made possible, if the old parties continue to ignore the problem," he said.

The Frankfurter Allgemeine Zeitung said the subject of immigration would continue to be a hot one. “Business and politics are both going to have their hands full trying to limit the negative fall-out between Switzerland and its cohesion within the EU.“

Yet regional newspaper the Kölner Stadt-Anzeiger reminded people that, “For anyone mocking the fear of foreign infiltration, they should not forget that in Switzerland 23 percent of residents are foreign – this is three times higher than Germany.“

The author added that when it “comes to heteronomy, the Swiss's concern is justified as they are seeing the number of laws being signed off on in Brussels, that they have to adopt, going up.”

The Stuttgarter Nachrichten said that “the Swiss are not angry about 'social tourists' but more about the influx of highly qualified, skilled workers that causes rents to rise, and the cheap labourers who give Swiss minimum-wage workers a tougher time finding jobs.”

Germans who cross the border could find themselves seeing the experience through the eyes of Bulgarians and Romanians entering EU countries, it concluded.

“One should not automatically equate criticizing freedom of movement to xenophobia,” said the Süddeutsche Zeitung daily newspaper. “Immigration is seen more as a symptom of a general unease towards a development that is threatening to spin out of control: a limitless growth that produces more hardship than prosperity,” it added.

The Lüneberg-based Landeszeitung called the referendum outcome a “warning sign for Europe.” The author also said that “until now, the right-wing populist spectre haunted Europe's periphery. But it has moved to the centre of the continent. In times of dwindling resources, the impulse to cut oneself off is human, but not humane.”