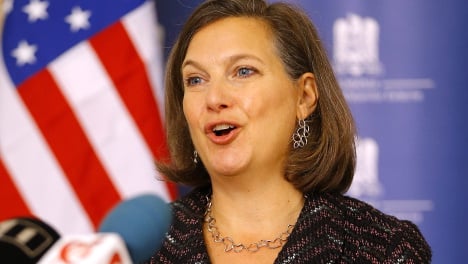 US diplomat Victoria Nuland has stirred up what German media normally describe as a "shitstorm". Photo: DPA

US official Victoria Nuland was recorded saying "Fuck the EU" while discussing the crisis in Ukraine with the US ambassador to the country.

A recording of the tapped telephone conversation was posted online.

It comes as the EU and US are in talks to end months of unrest in Ukraine between the opposition, who want the country to become closer to the West, and the government who turned down a deal with the EU late last year under Russian pressure.

"The chancellor considers this statement absolutely unacceptable … and wants to emphasize again that [EU foreign policy chief Catherine] Ashton is doing an outstanding job," Merkel's spokeswoman said. "The European Union will continue with its intensive efforts to calm the situation in Ukraine."

In the recording Nuland and US ambassador to Kiev, Geoff Pyatt, discuss frankly which opposition figures should go into the new Ukrainian government.
"That would be great I think to help glue this thing and have the UN glue it and you know, fuck the EU," Nuland says, in apparent frustration at policy differences.
The clip went viral after somehow being intercepted and uploaded onto YouTube accompanied by Russian captions.
The US State Department was left fuming after the leak, pointing the finger at Russia for allegedly bugging the diplomats' phones.
Merkel's spokeswoman Christiane Wirtz, asked whether a US apology had been received, told the Berlin press conference that "contact was made with the chancellery", without providing further details.
A German foreign ministry spokesman touched on the suspicion that Russia was behind the leak to take a swipe at the United States for its own sweeping surveillance, including of Merkel's mobile phone. "This shows you that eavesdropping is stupid," he said.
Washington's new top diplomat for Europe apologized on Thursday for her comments.
EXPLETIVE WARNING: Listen to the telephone conversation below.

The German press has played down Nuland's use of the expletive to described the EU.

In it, the author puts forward the argument that the word “fuck” is thrown around freely in the US, especially in high-pressure situations.

“Europe needs to just laugh about the American F-word. A bit of humour wouldn't go amiss in transatlantic relations," it said. The author posed the question whether Europe's anger was fair. “Yes and no” was the answer.
It was, the author said, justifiable when taking into consideration the unrest engulfing Kiev and Ukraine currently.
CLICK HERE for The Local's Politics section
Die Welt newspaper took the opposite approach to Spiegel, calling the use of “fuck” a taboo in the US.
“Not even those affected were surprised by Nuland's unladylike turn of phrase she used to express her negative judgment of the Europeans," Die Welt wrote. "In a different phone call, which can also be heard on YouTube, top German diplomat Helga Schmid can be heard complaining that the USA feel the EU is being 'weak' on Ukraine.”
“Nuland's conversation with Pyatt makes it clear how intensively the West, especially the US, are concerning themselves with the current uprising in Ukraine and what they think of opposition leaders," it added.
READ MORE: US view of Germany 'better than ever'