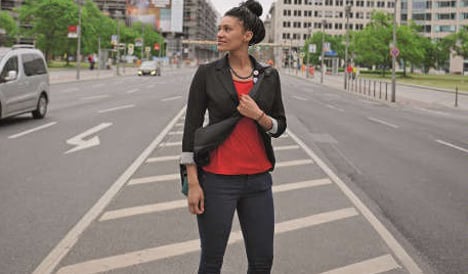 One of the models from the shelved campaign. Photo: Berlin Commission for Integration and Migration

The models were used to tell the stories of real migrants through photos and interviews after the Berlin Commission for Integration and Migrants, which ran the campaign, was unable to find willing migrants to be named and photographed alongside their stories, according to the Tagesspiegel newspaper.

A worker at the Berlin branch of the Association for Intercultural Work, who also asked not to be named, told The Local she was not surprised that migrants did not want to be identified.

"It's not just difficult for migrants to have their pictures taken and their names advertised, it's a matter of privacy and needs to be on a basis of trust,” she said.

After looking for migrants for the "Make Berlin Your Job" campaign via email and word of mouth, Berlin's integration minister Monika Lüke said she was only able to find four volunteers – but only two who were willing to use their real names and photos.

Talking to Tagesspiegel, Lüke said the lack of volunteers showed why the campaign was so badly needed. "The issue needs to be worked on by the administration,” she said.

One of the models played the part of Deborah Miller, a budding government inspector, and the other Cem Altan, working for the office of occupational safety.