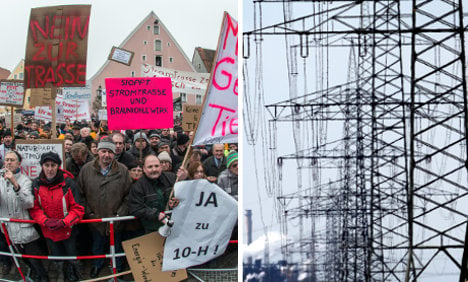 More protests like this one in Rossmarkt, Bavaria, are expected. Photo: DPA

Network operators Tennet and TransnetBW have formed a joint venture to build the link which is intended to join wind farms in northern Germany and off the northern coast, with high-consuming regions in the south.

The idea is to compensate for the scheduled closure of Germany's nuclear power plants.

The SuedLink project should be finished by 2022, running through Schleswig-Holstein, North-Rhine Westphalia, Lower Saxony, Hesse and Bavaria.

The masts, already dubbed monsters in some German media, will be up to 70 metres tall. But Hartman said he had taken into consideration "how the landscape looks, and where people live" along the proposed route.

"We are talking about the artery and backbone of the Energiewende [move away from nuclear power to renewable energy sources]," said TransnetBW manager Rainer Joswig.

He said the aim was to start getting planning permission in 2016, and for the cable to be operating in 2022.

The proposed route runs from Wilster in Schleswig-Holstein, past Verden and then between Hanover and Lehrte, past Hildesheim and then south-west towards Höxter and Warburg in North-Rhine Westphalia and west of Kassel.

From there it is planned to head south past Bad Hersfeld and Fulda, finishing up near Grafenhreinfeld in Bavaria. The SuedLink stretch is just one of three large new building projects connected with the Energiewende, which are expected to cost at least €10 billion in total.

Three of these smaller projects have already provoked such huge opposition that the Bavarian state government has demanded a moratorium – despite the Christian Social Union, which dominates Bavarian state politics – having voted in favour of it at national level.

A 450-kilometer stretch between Bad Lauchstädt in Saxony Anhalt and Meitingen in Bavaria has attracted particular protest.