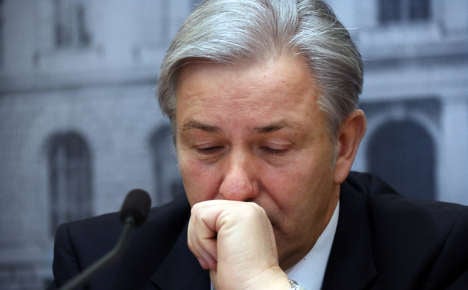 Fellow Social Democrats (SPD) lined up on Thursday to criticize Klaus Wowereit, with mayor of the Neukölln district of Berlin Heinz Buschkowsky questioning, during an interview with RBB radio, Wowereit's decision to continue his skiing holiday in Tyrol despite the row.

He described Wowereit's continued presence in the Austrian Alps as "unfortunate". "The master of the house must come home," he said.

The scandal came to light earlier this week when Berlin's senator for culture André Schmitz  handed in his resignation, admitting to having hidden €425,000 in a Swiss bank account. It comes at a time when the centre-left SPD has been critical of wealthy tax evaders.

It was also revealed that Wowereit, who was once snapped quaffing champagne out of the red stiletto shoe of an ambassador's wife, had known about the tax scandal since 2012.

On Wednesday, the deputy leader of the Free Democrats (FDP) Wolfgang Kubicki demanded the Berlin mayor's resignation, saying that the 60-year-old, who is openly gay, "held his protective hand over a convicted tax evader for almost two years".

A group has also formed a petition calling for a referendum on Wowereit's resignation and new elections for the state government. So far there has been little support for such action, with the initiative's Facebook page recording just 121 Likes.

But Germany's press has also piled in to attack Wowereit.

The Frankfurter Allgemeine Zeitung said the case added to Wowereit's "list of his disgraces", while the Süddeutsche Zeitung wrote: "Klaus Wowereit is a man, that as well as mastering the art of silence also seems to have mastered a lack of presence."

Meanwhile, Tagesspiegel reported that Wowereit's political weight was "dwindling" adding that "he lacks the ideas, the power and increasingly the desire to shape the city".

Welt used the opportunity to take a dig at the Social Democrats themselves, writing: "If one remembers how scathing the Social Democrats were in the way they judged tax evaders such as Uli Hoeneß and others with wealth, the nonchalance with which Wowereit has overlooked these "personal misconducts" in fact seems remarkable."

It is not the first time Berlin's mayor, who is often described as a "champagne socialist" by his opponents, has been called to step down from his position since he took on the post in 2001.

In January last year, Wowereit rejected calls for his resignation over the Berlin Brandenburg Airport debacle.

The mayor was initially blamed for extensive delays to the project, which was originally scheduled to be finished in 2011 but has been repeatedly pushed back, and resigned from his position as chairman of the airport's board.

However, in December he was reinstated to lead the project following a vote.

Wowereit was once tipped as a future leader of the SPD at national level following successful re-elections in Berlin.