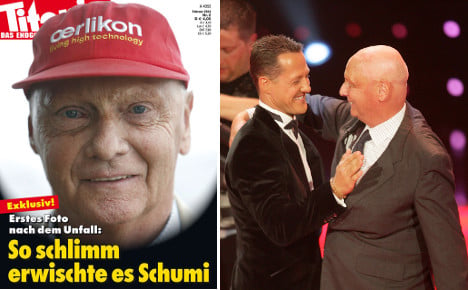 The magazine cover and Michael Schumacher and Niki Lauda in in 2007. Photo: Titanic/DPA

“Exclusive! First photo after the accident,” it read, referring to the skiing crash in the French Alps on December 29th in which Michael Schumacher was badly injured.

Satirical magazine Titanic placed a photo of Austrian Lauda, who was badly burnt in a Formula One accident in 1976, above the headline.

Schumacher, the seven-time Forumla One champion, has been in a medically induced coma since the accident.

But last week the German’s manager said doctors at his hospital in Grenoble, France, were slowly reducing his sedation to wake him up. There is also a guide in the magazine for parents to describe Schumacher’s accident to their children “with fun and games”.

It also contains a puzzle with Schumacher in a helmet and a labyrinth where taking the wrong turn down a mountain puts the player in hospital.