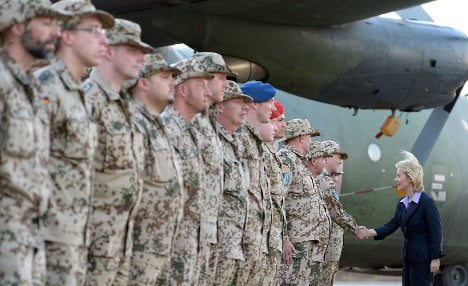 Up to 250 Bundeswehr soldiers may now join the mission, up from the current limit of 180, under the decision which must still be backed by the Bundestag lower house of parliament.

The cabinet also extended until February 2015 the German contingent's mandate in the European Union Training Mission (EUTM), which began overhauling Mali's army in April to help the west African nation take over from foreign troops defending it against Islamist extremists.

Germany – often criticized for its post-World War II reluctance to send combat troops abroad – currently has around 100 personnel on the ground in Mali.

"This is about training and, above all, the protection of the trainers too," said new Defence Minister Ursula von der Leyen, who had already signalled plans to boost the training mission in Mali.

She flew to Senegal on Wednesday to meet German troops and then to Mali.

Von der Leyen has often expressed interest in Africa-EU relations, with the two continents are separated by just 14 kilometres of sea at the narrowest point. Asked by a news weekly last month whether Germany should boost its international military engagement, she said "within the framework of our alliances, yes."

In crisis-hit African countries, Germany "cannot look the other way when murder and rape are a daily occurrence, if only for humanitarian reasons," von der Leyen, who took over the job in December, told Der Spiegel news magazine.

Her remarks triggered a debate in a country still marked by its militaristic past, with a poll last week indicating that most Germans opposed a bigger role for their military in the world's trouble spots.

President Joachim Gauck also appealed for his country to play a greater role on the world stage and in tackling global trouble spots in an opening address to the Munich Security Conference last week.

The German cabinet also decided on Wednesday to extend the withdrawal date for troops from Afghanistan by another ten months.

It is the last time the 12-year mission will be extended. The move will have to be approved by parliament but is not expected to face opposition.

Germany currently has around 3,100 troops in Afghanistan as part of the ISAF mission. The extension means troops will leave at the end of this year.