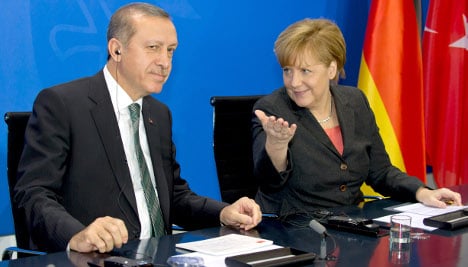 Erdogan told a Berlin think-tank on a visit to Europe's top economy that the EU could also benefit from Turkey's presence at the bloc's table such as in regional conflict resolution.

"We expect and would like also to receive the support from Germany for the path into the EU and the EU admission process," Erdogan told the German Council on Foreign Relations.
"We would like for Germany to campaign [for it] more strongly than up until now," he added through an interpreter.

Erdogan was later to meet Chancellor Angela Merkel whose conservatives favour forging a "privileged partnership" between the EU and Turkey rather than full entry.
Erdogan's visit to Germany, home to around three million people with Turkish roots and Turkey's biggest trading partner, comes as he is facing his toughest political crisis in 11 years in power at home.
It also follows a recent trip to EU headquarters in Brussels aimed at reinvigorating Turkey's longstanding bid to join the bloc but dominated by his controversial response to a massive graft scandal.
"It goes without saying that also it's up to Turkey, in the [EU] admission process, to pursue its reforms and to continually further carry these out," Erdogan said.
Turkey began formal EU membership talks in 2005 which then hit several stumbling blocks but negotiations resumed late last year following a three-year freeze.
Merkel, Erdogan urge UN action on Syrian refugee plight
P { margin-bottom: 0.21cm; }

After talks with Erdogan, Merkel called for a more united UN Security Council response to the "inconceivable" humanitarian plight of Syrian refugees.

Talks with Russia and China should be held as well as with non-Security Council member Iran to help people fleeing the nearly three-year-old conflict, Merkel told a joint press conference with the PM.

"We agree that developments in Syria are unacceptable… and that we want to further advance the unity of the international community of states, in particular on the UN Security Council," she said.

Peace talks held in Geneva last month did not provide the hoped-for humanitarian support, Merkel said, adding: "So we cannot now twiddle our thumbs but must try to speak also with Russia and China and keep in contact with Iran."

Erdogan, visiting Europe's top economy, which is home to around three million people with Turkish roots, also called for reform of the UN Security Council to prevent one of its five permanent members being able to block necessary action.

Russia and China have vetoed three UN Security Council resolutions proposed by Western nations to increase pressure on Syrian President Bashar al-Assad over the conflict, in which more than 136,000 people have died since it began in March 2011. Merkel said that Turkey, which borders Syria, was making an "enormous contribution" in hosting refugees – the Turkish foreign minister has put the total number at 700,000 — and that Europe must go further on that issue.

Germany agreed last year to take in some 5,000 Syrian refugees needing "special protection" and is reportedly ready to accept a further 5,000.