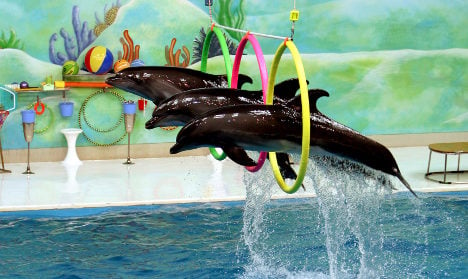 Recent images of dolphins being rounded up for capture and slaughter in blood-filled waters off the Japanese coast added to the pressure to boycott cetacean shows, Die Zeit newspaper said in its report of the move by TUI.

Negotiations with the German-based Whale and Dolphin Protection Forum (WDSF) resulted in all such trips being dropped from its catalogues, TUI spokesman Mario Köpers told the newspaper.

Even if the conditions for the animals were not bad everywhere, he said it would cost so much money to check all the facilities around the world, that the firm would rather pull such trips from its selection, he said.

More than 50 were caught alive, including an albino baby, and will be sold to dolphinariums. Trained dolphins can be sold for up to $150,000, while the meat from a slaughtered one is only worth around $600, Die Zeit reported.

Ortmüller said he expected the TUI ban to have a significant impact on the earnings of dolphin and orca shows, as the firm is one of the world's biggest travel operators.

Animal protection groups have long criticized conditions at dolphinariums around the world, but particularly in Turkey, Dubai and Egypt.