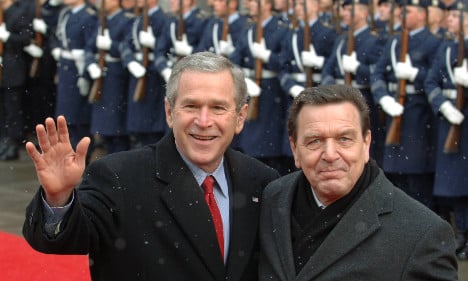 Schröder with President George Bush in Mainz, Germany, in 2005.

Schröder, the Social Democrat chancellor who served from 1998 to 2005, appears on a list of names of people and institutions put under surveillance by the US National Security Agency (NSA) from 2002, at the start of his second mandate as German head of state.

At the time Germany was opposing the invasion of Iraq, a stance which shook relations between it and the US.

The NSA has been at the heart of a spying scandal which erupted last year.

US-German ties soured amid revelations leaked by former CIA contractor Edward Snowden that US intelligence agencies had eavesdropped on Merkel and collected vast amounts of online data and telephone records from average citizens.

The dispute has threatened to derail negotiations on a sweeping transatlantic free trade agreement known as TTIP.

Schröder said he was unsurprised by the latest spying report.

"At the time the idea would never have occurred to me, but now it doesn't surprise me," he told Norddeutscher Rundfunk (NDR) and the Süddeutsche Zeitung newspaper.

US President Barack Obama in a recent interview assured that Merkel was no longer under surveillance.

His Secretary of State John Kerry acknowledged Friday that relations with Germany had gone through a "rough period" over the NSA snooping but said that shared interests would help put ties back on track.

Kerry, speaking in Berlin, said then that the United States took Germany's anger over revelations that US intelligence monitored Merkel's mobile phone seriously.

Asked whether the US administration would sign a no-spying agreement that Germany has demanded in the wake of the scandal, Kerry said only that Merkel and President Barack Obama were in "consultations" on the issue.