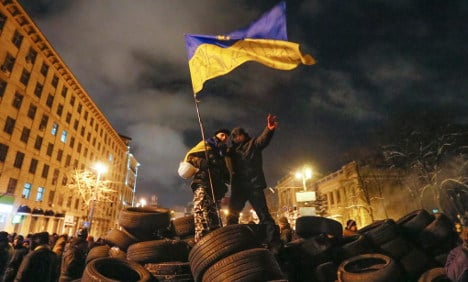 Steinmeier told ARD’s Tagesthemen show on Monday night that sanctions against the Ukrainian government should not be ruled out if ministers failed to make progress in talks with the opposition.

But Ukraine’s Foreign Ministry said in a statement on Tuesday that it hoped the German government would take a “constructive, unbiased position”.

Ukraine was plunged into crisis in December when President Viktor Yanukovych turned away from a treaty with the European Union in favour of a deal with Russia.

“I believe we should threaten sanctions,” Steinmeier said.

Merkel had said on Friday that sanctions were not on the agenda.

It was reported last Wednesday that the US government was preparing financial sanctions against Ukrainian officials and opposition leaders to be imposed if the violence spreads.

Steinmeier also warned on Monday against a “bidding competition” with Russia over who should lead the country, where “who pays the most enters”.

"It [the situation in Ukraine] remains a powder keg and I hope neither side will light it," Steinmeier added.