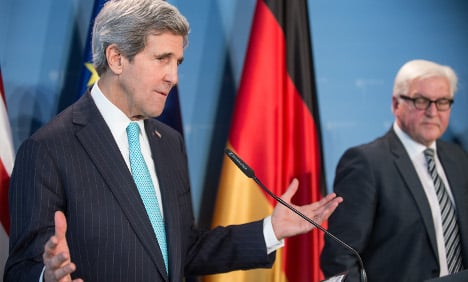 After talks in Berlin with his German counterpart Frank-Walter Steinmeier, Kerry told reporters that the United States took Germany's anger seriously, which was sparked by revelations that US intelligence monitored Chancellor Angela Merkel's mobile phone.

"I want to say to the German people that it's no secret that we've been through a rough period," Kerry said.
Asked whether the US administration would sign a no-spying agreement that Germany has demanded in the wake of the scandal, Kerry said only that Merkel and US President Barack Obama were in "consultations" on the issue.
"The consultations will continue between our intelligence services," he added.
Kerry said the United States was "committed to privacy".
"We absolutely share a commitment to try to put this behind us in an appropriate way," he said.
Kerry, who will also attend the Munich Security Conference while in Germany, said the US and Germany had "a long history of great cooperation on complicated issues like counter-terrorism, national security and defence" which would continue due to shared interests.
CLICK HERE for The Local's Politics section
He only spent a few hours in Berlin before flying to Munich for the annual security conference, where some 20 heads of state and government and 50 foreign and defense ministers will discuss global hotspots and conflicts.
On the sidelines of the Munich Security Conference, Kerry will "have an opportunity to have his first meeting with the major figures in the Ukrainian opposition" on Saturday, a senior State Department official said.
Among the Ukrainian opposition leaders slated to hold talks with Kerry are UDAR (Punch) party leader and former boxing world champion Vitali Klitschko and opposition politician Arseniy Yatsenyuk.
Representatives of the Ukrainian government were also expected to attend the Munich talks, including Foreign Minister Leonid Kozhara.
The Ukrainian opposition will have the chance to meet a number of international stakeholders in the political crisis, triggered when President Viktor Yanukovych ditched plans to sign an association agreement with the EU and struck a multibillion-dollar deal instead with former Soviet master Russia.
READ MORE: Germany slips in foreign policy rankings