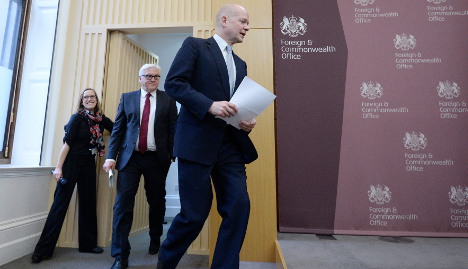 Speaking after he met his British counterpart William Hague, Steinmeier said Europe's economic powerhouse Germany appeared to have different views on the issue of changing the 28-member EU's treaties.

Prime Minister David Cameron's hopes of renegotiating Britain's relationship with the EU had largely rested with Germany, after President Francois Hollande of France said last week that treaty change was "not a priority".

"It would be an exaggeration to say that the UK and Germany are pulling in exactly the same direction," Steinmeier told a joint news conference with Hague.

"That is obviously not the case, but it is not just to do with the UK and Germany."

Under pressure from eurosceptics in his Conservative party, Cameron has promised to renegotiate Britain's position in the EU and put the new deal to a referendum in 2017, provided that he wins the next election in May 2015.

Cameron in particular wants to repatriate some powers from Brussels, as well as giving extra legal powers to protect the 10 member countries including Britain that do not use the euro currency.

Asked if Germany thought treaty change was possible by 2017, Steinmeier said: "I can't make any predictions on this…. The opinions vary that much so I really can't try to predict anything."

Hague said he understood that treaty change "will not be the top priority of every government". Britain is "not in any way disheartened" by Hollande's statement, made during an Anglo-French summit held at an airbase in southern England, he added.

"The French government…does not rule out the kind of reform we are seeking," Hague told the news conference.

Germany and France have together formed the economic engine and political axis at the heart of Europe for decades, but they have differed recently on issues including treaty change.

Germany had seemed to be more inclined to reform the treaties to strengthen joint economic governance in the bloc following the euro's debt crisis, while France has steered away.