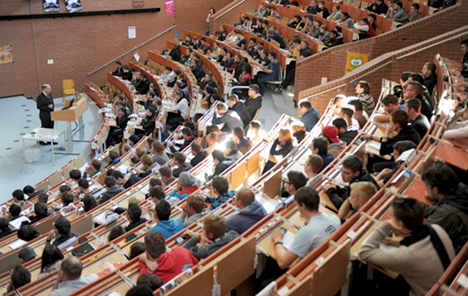 Worth it? Photo: DPA

“The consequences to Germany's economy will be damaging, if the trend to study at any cost is not stopped,” said Eric Schweitzer, president of the Association of German Chambers of Commerce and Industry (DIHK).

Schweitzer was referring to the amount of young people who undertake lengthy study in Germany, while companies struggled to fill traineeships.

“The truth is that many years of increasing student numbers in Germany have resulted in our classrooms now bursting at the seams, while companies are desperately seeking apprentices,” he said in a statement.

This could lead to a backlash of unemployment in the next few years, said Schweitzer, as there would be no one to fill jobs that require specific skills.

“A high number of graduates, as the crisis in southern European countries showed, is no guarantee of a prosperous economy and low youth unemployment,” Schweitzer added.

“Every young person should be able to freely develop their talents and skills, but not every high school graduate is suited to study.

“High drop-out rates in higher education concern me because they harm the chances of young people in the labour market.”

Figures from the Federal Statistics Office, Destatis, also revealed on Monday that just 40 percent of German students were completing their degree in the allocated time – roughly three years for a Bachelors and two for a Masters.

Worst offenders were those studying German, with 68 percent taking longer than planned.

This was closely followed by theology at 65 percent. And close to 60 percent of sports science, philosophy and history students took too long.

Nearly all administrative studies students finished on time, as did medics, mathematicians and scientists.

Around 25 percent of those who started a degree did not finish it, due to “false expectations” the DIHK said.