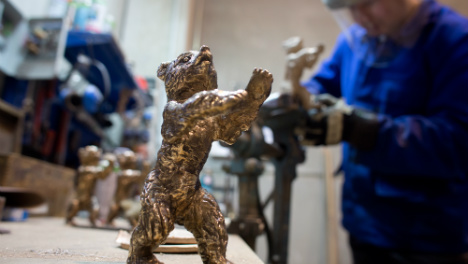 The 64th Berlinale, as the 11-day event is known, marks the first major European festival of the year and serves as a launchpad for Hollywood fare and risk-taking independent movies from around the world.

The sprawling festival will screen more than 400 films in cinemas across the snowy German capital, and many of the hottest tickets are for movies outside the main competition.

George Clooney is due in town to present "The Monuments Men", about a team of art experts who fought to protect precious artworks from the Nazis during World War II.

"It is 30-35 minutes longer than the version already running in Denmark and other places and so it's of very special interest for cinephiles," he told AFP.

"What was cut out of the cinema version — is it explosive or superfluous? I'm really curious."

However, he noted that von Trier was not expected to appear in public in Berlin following a disastrous stop in 2011 at the Cannes film festival where he was ignominiously booted out for making a Nazi joke about himself at a press conference.

"You'll essentially have a red carpet for an invisible man," Schulz-Ojala said.

On opening night, Anderson will unveil his keenly awaited "The Grand Budapest Hotel", starring Ralph Fiennes, Adrien Brody and Tilda Swinton, about the escapades of a crafty concierge between the two world wars.

Linklater, who brought his now Oscar-nominated "Before Midnight" to Berlin last year, will show "Boyhood", made over more than a decade and starring frequent collaborator Ethan Hawke as well as Patricia Arquette.

Academy Award-winner Forest Whitaker teams up with Harvey Keitel in Rachid Bouchareb's "Two Men in Town", about an ex-convict who has converted to Islam.

The French-Algerian director is best known for the 2006 drama "Days of Glory" (Indigenes), about north Africans serving in the French army during World War II.

Schulz-Ojala said he was also intrigued by entries from Argentina and China, "two strong countries for cinema".

The drama "History of Fear", set in a gated community in the suburbs of Buenos Aires, is director Benjamin Naishtat's first feature.

And Celina Murga's "The Third Side of the River" tells the story of a respected doctor who lives a double life with separate families. She is one of four women vying for prizes.

China will be represented by the thrillers "Black Coal, Thin Ice" by Diao Yinan, Ning Hao's "No Man's Land", and the novel adaptation "Blind Massage" by Lou Ye.

Peruvian director Claudia Llosa, who captured the Golden Bear in 2009 for her harrowing drama "The Milk of Sorrow", will present her English-language debut, "Aloft", featuring Jennifer Connelly and Cillian Murphy.

Austrian filmmaker Feo Aladag, who picked up prizes on the festival circuit in 2010 for "When We Leave", about so-called "honour killings", will unveil "Inbetween Worlds", about a German soldier in Afghanistan.

The festival will also honour veteran British director Ken Loach, 77, with a Golden Bear for lifetime achievement and a retrospective of his work.

The Romanian family drama "Child's Pose", about a growing cleft between rich and poor since the end of communism, took home the top prize last year.

The event will wrap up on February 16 with screenings of its biggest hits.