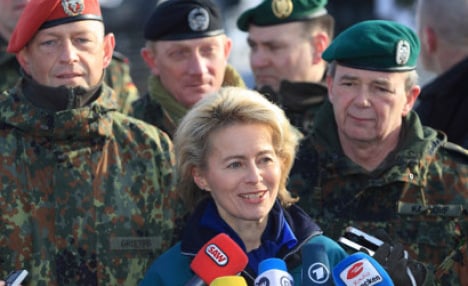 Asked whether they would support more deployments of Bundeswehr forces to crisis regions, 61 percent said "no" versus 30 percent who would back such moves, according to a poll for ARD public television.

The survey was conducted among 1,000 eligible voters, on Monday through to Wednesday.

Asked by Der Spiegel magazine whether Germany – often criticized for its post-World War II reluctance to send troops abroad – should boost its international military engagement, she said "within the framework of our alliances, yes".

In crisis-hit African countries, Germany "cannot look the other way when murder and rape are a daily occurrence, if only for humanitarian reasons," she added.

The remarks triggered a debate in a country still marked by its militaristic past and the issue is to figure prominently at  the 50th Munich Security Conference, bringing together global leaders from politics, defence and diplomacy and starting later Friday.

Merkel said on Thursday after talks in Berlin with UN Secretary General Ban Ki-moon that she would take Germany's ongoing deployments in Afghanistan and Kosovo into account before asking parliament to send forces elsewhere.

Berlin saw such deployments as a last resort and would continue to focus on diplomacy, development aid and training of local troops to help quell unrest where it arises, she said.

And she explicitly ruled out sending combat troops to CAR as part of an EU military mission, as Ban said he would welcome greater German "engagement" in resolving world crises and standing up for human rights.

In a separate poll on Thursday for Stern magazine, 51 percent of Germans surveyed said the Bundeswehr should take part in "humanitarian" missions in African crisis zones, while 43 percent rejected such action.