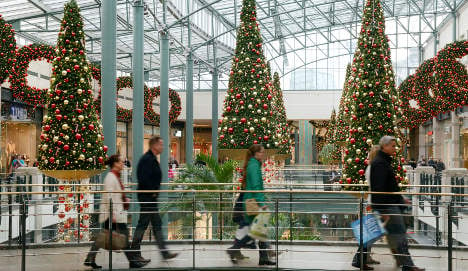 Retail sales dropped in December. Photo: DPA
Retail sales, a closely watched measure of household confidence, dropped by 2.5 percent in December compared with November, the federal statistics office Destatis said in a statement.
They had increased by 0.9 percent in November and analysts had been forecasting steady sales for December.
On a 12-month basis, too, business dropped sharply for retailers, with sales showing a decline of 2.4 percent in December compared with the same month last year, the statisticians calculated.
Taking 2013 as a whole, retail sales edged up by a meagre 0.1 percent over the entire year, Destatis calculated.
The monthly data appeared to fly in the face of the latest consumer confidence indices which rose strongly both in Decemeber and in January.
CLICK HERE for more Business news
But Destatis' retail sales data are notoriously volatile and subsequent to frequent revision. And analysts said they were convinced that would be the case for the December figures.
"The sharp drop contradicts all other evidence on the German consumer so much that it may get revised significantly," said Berenberg Bank economist Christian Schulz.
"Consumer confidence have reached new record levels, wages keep rising, unemployment is falling and inflation very low thanks to stable energy prices. This is a strong cocktail of fundamentals that should boost household spending in 2014," the expert said.
According to the Destatis data, retail sales fell sharply across almost all categories in December on a 12-month basis.
Some downside risks
Sales of furniture and DIY goods, which had been one of the stronger categories in recent years as Germany's housing market picked up a bit, were the worst performer.
Pharmacy sales were the only positive exception.
Schulz said the retail sales data "are not a good indicator of consumption in gross domestic product (GDP), which probably rose by 1.0 percent over the year.
"Consumers seem to be spending their money elsewhere than in those shops reporting in the statistical offices survey. Car sales, which had been picking up but do not enter the retail sales data, may play a role, too," he added.
Natixis economist Johannes Gareis was more cautious, saying the drop in retail sales "should further weigh on private consumption, which has been losing momentum over the course of last year."
However, "for the first quarter of 2014, we stay optimistic and expect private consumption to continue to play the most prominent role in Germany's economy. This scenario is backed by rising consumer confidence, high employment, lower price inflation, and low interest rates," Gareis said.
Annalisa Piazza at Newedge Strategy said: "We wouldn't read too much out of one-month data. That said, the picture for fourth-quarter retail activity is certainly not too strong.
"We rule out that today's data are the harbinger of a period of falling personal consumption but we need to consider some downside risks to GDP growth," Piazza said.
READ MORE: Aldi plans multi-billion US expansion