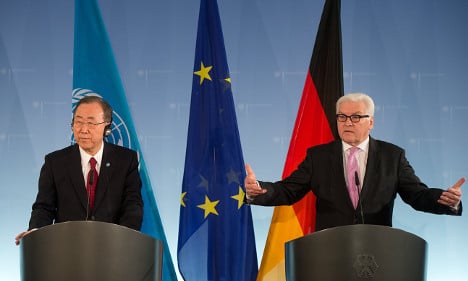 Germany slipped from top spot last year to third place behind France and the UK in the annual European Foreign Policy Scorecard, published by the European Council on Foreign Relations (ECFR).

The council rated Germany as a “slacker” in four categories including the EU Commission’s dispute with China over solar panels, Russian gas imports, and foreign development aid.

“Germany was preoccupied by elections in 2013," the report said. "It took a more critical stance towards Russia than in the past and played a key role on TTIP (US-EU trade talks), but undermined the European Commission in the dispute with China over solar panels and undermined attempts to reduce dependence on Russian gas.”

It was, however, rated a “leader” in ten categories being praised for its stance on Iran, Syria and the Ukraine.

In a speech to the Bundestag on Wednesday, Steinmeier said that if Germany stayed out of foreign affairs, as it has been accused of doing by its allies, “conflicts would not be resolved”.

"Pursuing a policy of military restraint is the right way; but it must not be mistaken for a general shying away from responsibility," he said. "Germany has become slightly too big and has too much influence in Europe to adopt this kind of strategy."

His comments echoed those made in an interview by Defence Minister Ursula von der Leyen over the weekend.

"We can't just watch from the sidelines when murder and rape are the order of the day," she told Der Spiegel magazine.