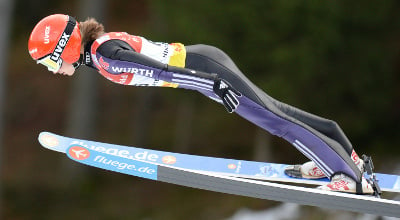 Ernst will be the youngest competitor at the Sochi Winter Olympics, which start on February 6th, after winning a silver medal at the World Cup in Norway last year.

The schoolgirl scored 270 points with a 97-metre leap in December, earning a place on the podium and with it a chance to compete in the Winter Olympics in Russia.

But despite her World Cup victory, Ernst was almost denied the chance to compete.

The teenage talent turned 15 on December 31st – only a few hours later and her ticket to Russia would have been invalid, as athletes must be 15 or older in 2013 to participate.

Ernst was still only 14 when she made the leap on to the podium at the World Cup last year.

She started in tenth place, but quickly moved up to fourth position after the first round and kept her focus in the finals to take second place.

Now the teenage athlete is part of the squad carrying Germany’s medal hopes to the Winter Olympics.

“Of course I’m delighted to reach the podium at my first World Cup. I’m so happy,” Ernst told n-tv back in December.

Yet she remains remarkably relaxed about her own success. “It’s kind of my job. I’ve been doing it since I was five years old,” she said after her silver medal win.

And success on the slopes is something of a family routine.

Her father, Joachim Ernst, was a famous ski jumper who won the World Championships in 1982 in Oslo, where he also met Gianina's mother, Cornelia, at the time a champion cross-country skier.

The couple have six children, two of which – Gianina and her elder brother Benjamin – take part in ski jumping competitions.

Joachim has always been his daughter’s main trainer, but she now also attends a sports school to help her develop her talent. She had her first taste of fame after winning the Swiss championships at the age of 12, but in June 2013 she decided to change sides and join the German team.

The side includes several young female stars who are hoping to reach the Olympic podium.

The coach of the national squad Andreas Bauer, 51, has been impressed by the star’s ability to stay calm under pressure.

“I saw a number of good jumps from her in training, but the coolness and composure she showed at the championship were not a given,” he told broadcaster ARD.

Bauer would like to see more recognition of the skills of these female athletes. Women ski jumpers compete from the same height as men and often travel further, due to their smaller size and slighter build.

“We are moving forward bit by bit. The level of skill has really improved and there have been great developments in technique,” Bauer told the Süddeutsche Zeitung. “A bit more attention would be nice, though.”

But Bauer is aware that, for Ernst, too much attention could be damaging. “We will have to protect her, so she is not overwhelmed,” he said.

As for the athlete herself, it would seem that her talent for flight has not stopped her staying grounded. “I want to keep being who I am,” Ernst told n-tv after her silver medal in December.