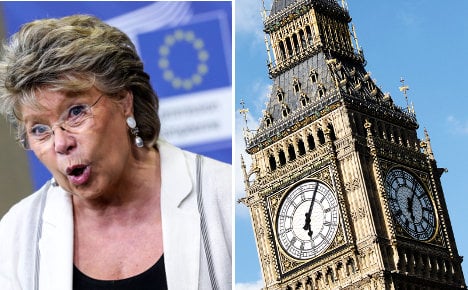 Viviane Reding, the EU’s justice commissioner, said citizens of the UK, Ireland, Denmark, Cyprus and Malta were effectively being “punished” and rendered “second-class citizens” for moving to other European countries – something they have the right to do under EU treaties.

Under current rules, British citizens lose the vote in the UK if they have lived abroad for 15 years. The other four countries restrict voting rights in other ways.

“The right to vote is one of the fundamental political rights of citizenship. It is part of the very fabric of democracy,” Reding said.

Citizens of EU member states living elsewhere in the 28-member bloc automatically have the right to vote in local and European Parliament elections, but rules for voting in national elections and referendums are decided by individual states.

In a recent Eurobarometer poll on electoral rights, two thirds of respondents said it was unfair that people lost their vote when they moved abroad within the EU.

The issue has been the subject of a campaign by British expats in various parts of the EU. Harry Shindler, who lives in Italy, last year lost his fight to have the restrictions overturned in the European Court of Human Rights. He likened his struggle to that of the Suffragettes.

Brian Cave, who lives in France, recently explained his position in an article for The Local France.

“Culturally I am British. I am very interested in how Britain acts in the world and who it decides to go to war with. I am tied up with Britain in every way and therefore should have the right to vote.

“The British government acts in my name but I don’t have a say in who it is."

Citizens of other European countries keep their vote under certain conditions. Germany requires citizens to be familiar with and affected by national politics. Austria requires voters to periodically renew their registration on the electoral roll.

Giles Goodall, Chair of Brussels and Europe Liberal Democrats, said: "This is a lifeline for the million plus Brits living in other EU countries who have either already lost their vote, or face losing it in the future. It's especially welcome news with an EU referendum looming, which could potentially result in British citizens losing their rights as EU citizens to live and work in other EU countries.

"The 15-year rule is simply no longer justifiable in this day and age, when British EU migrants in France, Spain or Poland can stay in touch with politics in the UK just as easily as someone at home. They should not be denied the option of registering to vote just because they've made use of their right to free movement as EU citizens."

British ministers have expressed qualified support for an extension of the franchise – Constitutional Reform Minister Mark Harper said in 2011 that the government was “considering” calls for change.

As yet, though, no concrete moves have been made.

While the most vocal campaigners want people to keep the vote in their home countries, others such as the Let Me Vote campaign say European citizens should be able to vote in the country in which they live instead.

Jean-Christophe Lagarde, secretary general of the French centre-right party the UDI told The Local France: “It makes much more sense to vote in the country where you live, than where you are from. If I lived in Germany I would want to have the vote for the Bundestag elections.”