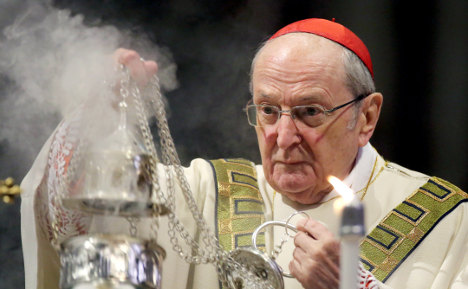 Cardinal Joachim Meisner was speaking on Friday to members of a conservative Catholic group famous for their large families when he said: "I always say, one of your families to me makes up for three Muslim families."

Muslim organizations and politicians from the Social Democrat and Green parties said they were "stunned" by the comments – which came a month before Meisner, 80, was due to retire.

The Cardinal said in a statement on Wednesday he regretted that his comments had caused such "irritation".

He added: "It was never my intention to offend those of other faiths with this…perhaps my choice of words in this case was unfortunate."

"I have repeatedly stated that in many cases Muslim families set an example to our ageing society," he said.

Bekir Alboga of the Turkish-Islamic Union told Deutsche Welle in an interview that Meisner's comments would have a polarizing effect. "We need bridge-builders not polarizers," he said.

North Rhine-Westphalia's Minister for Integration Guntram Schneider said he was "very disappointed that a leading representative of the Catholic church is pitting people of different faiths against each other".

And the state's minister for schools Sylvia Löhrmann said: "Ranking the values of families, and thus children, on the basis of their religious affiliation isn't just against the constitution, it is also anything but Christian."

"Cardinal Meisner would be well advised to clarify these unfortunate statements," she added.

Meisner has previously been in the news for his vehement defence of controversial German bishop Franz-Peter Tebartz-van-Elst, whose €31-million building project garnered global attention last September.