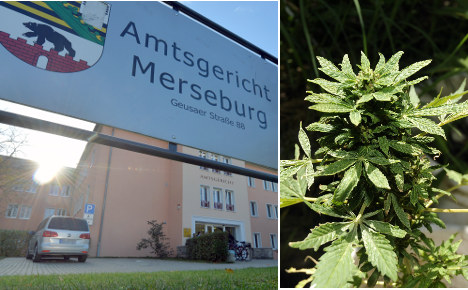 The case was heard in Merseburg court. Photo: DPA

In May 2012, Christine W. received the seedling as a present from her neighbour.

“Our neighbour Bernd knows a lot about herbal remedies. I thought it was a mimosa plant,” she told the judge in the Saxony Anhalt court, Bild newspaper reported.

Not knowing what it was, the 63-year-old planted the seedling. “I have green fingers. The bush was tiny in May, but in August it was over two metres high," she told the judge with pride.

But in September 2012, eight police officers raided Christine’s garden in Halle, Saxony-Anhalt, and seized the plant, which had been placed on the compost heap after a storm.

The case was brought before a court in Merseburg where Christine's lawyer defended her actions. “My client had no idea what she was growing," he said.

The judge agreed. The couple were ordered to donate their €100 fine to an organisation working with young people to prevent drug addiction and the case was closed.

Their neighbour Bernd E. was given fourteen months probation in November 2012 for making hash schnapps. The couple say they were unaware of his conviction.