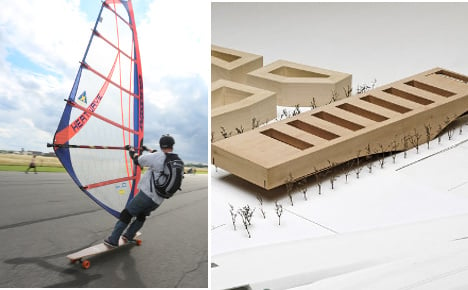 A wind skater enjoying Tempelhofer Feld and one of the designs for a central library. Photo: DPA/H.-J. Wuthenow

A debate has raged over the future of Tempelhof Airport in the south of the city since its closure in 2008. Its open space is currently used for concerts and city gardening.

Developers want to build apartment blocks and a central library on the edge of the site, but people living in the area hope to preserve it as a green, open space.

The development plans sparked a petition which gathered enough signatures to force a city-wide referendum on the future of the site.

Around 233,000 signatures were gathered in total but thousands were invalid as only those with German citizenship or registered in Berlin counted. The final number was still enough to send the decision to referendum.

Berlin’s Senate will now need to fix a date for the referendum. May 25th, the date of European Parliament elections, is being touted as a potential, the Tagesspiegel newspaper reported.

It would increase turnout and therefore the chances of success of the referendum.

Berlin’s last referendum in November over whether to take the city’s energy grid back into public hands failed because of a low turnout. A referendum needs at least 25 percent of eligible voters to support the proposal for it to be ratified and a majority of those who do vote to say yes.

Tempelhof Airport was used by the Allies to break the Soviet blockade of West Berlin in 1948. Architect Jens Oberst, whose library was among two winning designs selected by Berlin's Senate for the site in December, told The Local that the referendum would not influence his plans.

He said: "We’re of the opinion that it is precisely our project which fits with a desire to have an open public space – not in the spirit of a backward looking minority, but in the spirit of integration and communication among different societies, societies which distinguish cities like Berlin whose diversity should be developed and realized.

"Our project can take on this function. It is more than just a library."