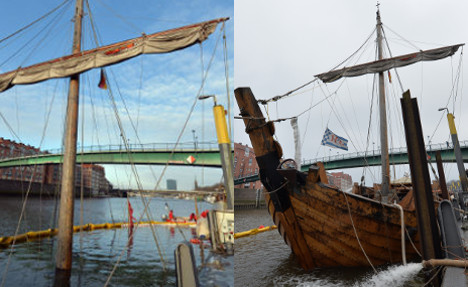 Roland of Bremen which sunk on Monday night is back. Photo: DPA
The Roland of Bremen, which sunk into the River Weser, was rescued on Wednesday by pumping water from the ship's hold.
A defective valve was found to be responsible for the leak, which caused the boat to fill with water and start to sink to the riverbed.
The hole was repaired and the boat was afloat again after a team of helpers worked through Wednesday to save the city landmark.
Harro Koebnik, head of the Hal över shipping company which retains the boat, told the Bild newspaper that the ship had been in an "excellent state" before the incident and was checked regularly.
Koebnik said that the costs of the damage were not yet known. But he added that since the boat was only filled with water for 24 hours, it should not be too extensive.
The boat may be moved to a safer place by cranes, he added.
According to police, the ship, based on a typical trading boat from the Medieval period, filled with water during the night on Monday. At about 3am on Tuesday a witness reported that it was slowly sinking.
When the fire department reached the site early Tuesday morning, water had spilled over the deck, meaning they were unable to climb aboard.
The ship is a reconstruction of a cog from 1380, the remains of which came to light during building work in 1962 in the Weser.
PHOTO GALLERY: Roland of Bremen On closer inspection in 1962, investigators found that the ship from 1380 had not yet been fully completed and had been washed out to sea in a storm, before it sank to the bottom of the river.
The original ship can be seen in the German Maritime Museum in neighbouring Bremerhaven. The boats were used for trading beer, grain or fish in the rivers and seas around Germany in the Hanseatic period.
Roland of Bremen is now hired out for events and tourist boat tours.
MORE: Bremen UFO halts flights at airport