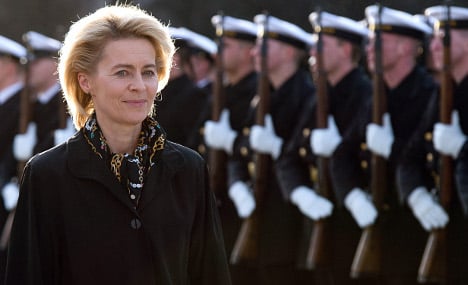 Defence Minister Ursula von der Leyen. Photo: DPA
Von der Leyen said the military should extend its engagement in crisis-hit areas of the globe.
"We can't just watch from the sidelines when murder and rape are the order of the day," she told Der Spiegel magazine.
Germany stayed out of sending troops to the Central African Republic last week, but will support the EU-mission with air transport. It could, however, send troops to Mali to support French operations there.
Opposition parties accused von der Leyen of changing tack and her comments mark a stark shift to the policy pursued by former Foreign Minister Gudio Westerwelle who sought to keep German troops out of war zones.
"Europe will not advance in the game of global powers if it refrains from military operations," she added.
READ MORE: 'Germany plays a larger role than people think'