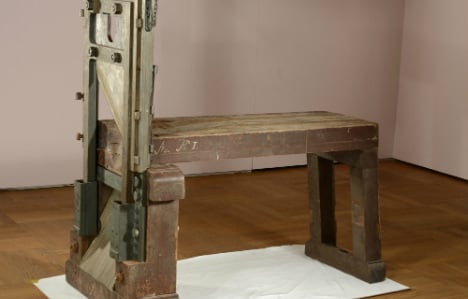 The blood-stained device which had a some 15-kilo blade was identified after 18 months of research at the Bavarian National Museum in Munich where it had been in storage for around 40 years without anyone realising, a museum official said.

Sybe Wartena, the museum's head of folklore, said a couple of factors indicated it was "with great likelihood" the one used in the execution of the Scholls, members of the White Rose student resistance group, who were detained after distributing flyers at a city university.

No other prison in Bavaria carried out as many executions as Stadelheim prison, where the Scholls were guillotined, and the mechanism clearly shows evidence of having often been used, he said.

"It's really worn from the blood and the regular cleaning of the blood," he said.

Another key clue is that a part of the device, a tipping board on to which the condemned were strapped, has been removed which the Scholl's executioner was known to have favoured to save time.

Under the Nazi dictatorship, the transportable guillotine was used in hundreds of executions from 1940-45 in several cities, but after the war its whereabouts became the source of mystery and rumour.

Long believed to have been thrown into the Danube River, it was never found during searches but probably was taken from the city of Straubing to Regensburg where it was handed over in 1974 to the National Museum.

The Scholls, known in German as the Geschwister Scholl, have been recognised as symbols of Germany's resistance movement against Hitler's regime, with a literary prize named after them as well as memorials and many streets and schools.