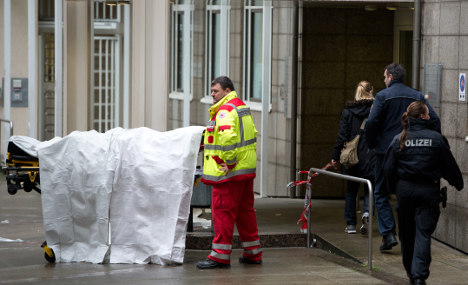 Two men died in the attack at the courthouse. Photo: DPA

A 47-year-old Afghan man from Eschborn, near Frankfurt, was arrested shortly after the incident. Initial reports suggest that he was armed with both a gun and a knife.

The two men killed are reportedly car dealers Barellay A. aged 50, and Mohammad P. aged 45, who were on trial accused of murder and two attempted murders in a case known as the Bloodbath of Steinbach.

Prosecutors believed the two men stabbed three rivals with a butcher’s knife in 2007, killing one of them in the Steinbach area of Frankfurt. The brother of the man killed is believed to have carried out Friday's revenge attack.

The first murder suspect died in the doorway of the courthouse after being shot. The second victim was stabbed in the building and died in an ambulance on the way to hospital, police spokesman Rüdiger Reges told broadcaster N24.

Reports began to come in on Friday morning that a brawl involving a group of people had broken out at 8.45am in, or just outside, courtroom E.

he court is on a busy street in the city centre, police have shut the building and emergency services were mid-morning still at the scene.