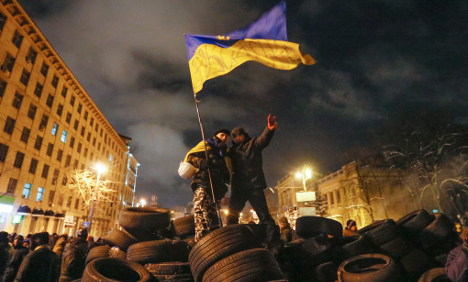 "We want to show that we are serious with our criticism," foreign ministry spokesman Martin Schäfer told reporters.

"We expect the ambassador to pass on our message immediately to the Ukrainian government." He added that Germany would stress its objections to draconian anti-protest laws Ukraine passed last week.

"We hope and assume that the government and the opposition have recognised that violence is senseless and that any new escalation with more casualties will not bring about anything good for Ukraine," he said.

We support the efforts of the European Union to encourage dialogue in Kiev." Schäfer said Foreign Minister Frank-Walter Steinmeier had spoken with his Ukrainian counterpart, Leonid Kozhara, and opposition leader and world boxing champion Vitali Klitschko earlier Friday.
In the talks with Kozhara, Steinmeier "asked him to stop the use of force against peaceful protesters."

Schäfer later acknowledged that some demonstrators had also engaged in violence and urged both sides to refrain from such acts. Klitschko took part in emergency talks late Thursday with President Viktor Yanukovych that failed to end Ukraine's worst crisis since its 1991 independence.

German Chancellor Angela Merkel spoke by telephone Thursday with Yanukovych and called on him to repeal the legislation barring demonstrations that have fuelled the most recent clashes.

Merkel had told reporters earlier that Ukraine must safeguard the lives of demonstrators but rejected calls for fresh sanctions against Kiev.

Chancellor Angela Merkel had already phoned Ukrainian President Viktor Yanukovych to ask him to repeal draconian anti-protest laws that have fuelled clashes between protesters and police in Kiev, her office said on Thursday.

In a telephone call, "the chancellor made a pressing appeal to the president to start serious dialogue with the opposition and to reach concrete results, including… the repeal of the laws… which limit citizens' rights," a statement said.

Merkel said earlier on Thursday that Ukraine must safeguard the lives of pro-EU demonstrators following deadly clashes with security forces, but she rejected calls for fresh sanctions against Kiev.

"We expect the Ukrainian government to ensure basic rights – particularly the possibility to stage peaceful demonstrations, to protect lives, and that violence not be used," she told reporters after a cabinet meeting, in which she also confirmed the G8 summit in 2015 will be held in southern Bavaria at Schloss Elmau.

Merkel said Berlin was "extremely concerned and shocked" by Ukraine "rushing through" laws that "question these basic freedoms".

"That is why the German government will work hard to ensure that something that is a basic right, namely the right to demonstrate, can be exercised by the Ukrainian opposition," she said.

"We call for talks between the Ukrainian government and the opposition and I stress once again that it is the responsibility of any government to ensure the possibility of peaceful freedom of expression and that this is, in our view, not possible in Ukraine at the moment or not sufficiently possible," she added. But Merkel said she and Foreign Minister Frank-Walter Steinmeier opposed sanctions for the moment.

"We spoke about it and the foreign minister and I believe that sanctions are not currently the order of the day," she said.

"We are in contact with opposition forces via various channels and seeing what Germany can do for now."

The Ukrainian opposition has said President Viktor Yanukovych must agree to three key demands – the holding of snap presidential elections, the resignation of the government and the annulment of anti-protest laws passed last week – for a compromise to be reached.

It agreed Thursday to observe an eight-hour truce with security forces but threatened to go on the attack if the government failed to agree concessions.

The head of the European Union executive, Jose Manuel Barroso, warned Ukraine on Wednesday of "possible" reprisals after the deaths of the protesters but stopped short of announcing sanctions.

Asked to elaborate on potential retaliation, Barroso said it was "premature" to decide on a course of action which would need to be approved by all 28 European Union member states.