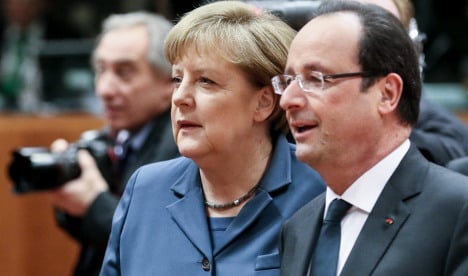 "We must take advantage of the situation: France and Germany both have three years ahead of them without any national elections," French foreign minister Laurent Fabius said after the meeting.

Fabius also indicated that the countries would co-operate more closely in economic and defence policy, as we well as on tackling climate change.

The two leaders are planning a joint visit to Georgia and Moldova, with which the EU is hoping to co-operate on energy matters.

Signs have emerged in recent days of France and Germany taking a step towards easing friction.

After speaking by phone on Saturday, German Foreign Minister Frank-Walter Steinmeier, who has visited Paris three times in the last two weeks, and his French counterpart Laurent Fabius were reportedly ready to examine concrete measures.

Steinmeier, a Social Democrat in conservative Chancellor Angela Merkel's left-right "grand coalition" government, told a Sunday newspaper that Europe could not leave France alone in its bid to restore order in the strife-torn Central African Republic.