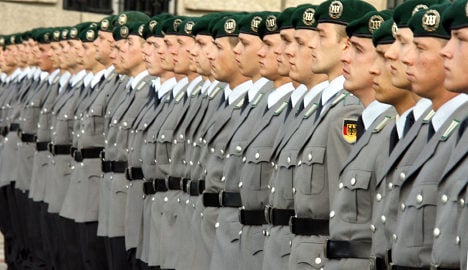 The Bundeswehr is clamping down on piercings, tattoos and haircuts. Photo: DPA

The detailed guidelines, published by the Ministry of Defence and brought into the public eye by respected military blog Augen Geradeaus, have caused controversy over the extent to which the military should control the lives of soldiers.

From February 1st, the Bundeswehr will be cracking down hard on how its troops present themselves.

As “representatives of their country” soldiers are not allowed to have pornographic, politically incorrect or “discriminatory” tattoos. Facial hair has to be short, with bushier styles permitted only during holiday time.

Instructions to keep fingernails short, make-up “decent” and jewellery minimal were not unexpected. But an entire section on “body modification” rose readers' eyebrows.

Tattoos are still allowed, but the army is taking a stricter line on what is and is not acceptable. Soldiers now have to keep pornographic or discriminatory motifs and scripts covered at all times when in uniform – even if they are on the neck, hands or face.

Tunnel piercings in ears and lips, decorative implants and mohawks are also ruled out.

Augen Geradeaus's blog post garnered nearly 200 comments within a day of it being published – most of them from Bundeswehr soldiers unsurprised by the very thorough nature of their new instructions.