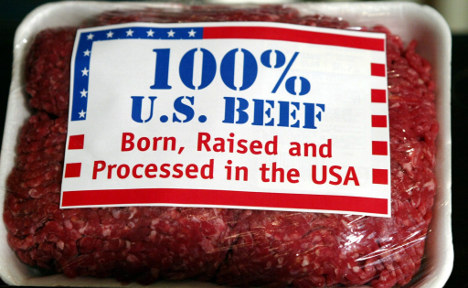 Small farmers in particular worry about a softening of European food safety standards and a joint "race to the bottom" if liberalised trade rules pit them against American agro-industry giants and food multinationals.

"If the Americans have the right to sell their pork here, it won't be easy for us," Kathrin Seeger, a pig farmer from western Germany, said at Berlin's "Green Week", a leading food, agriculture and horticulture fair.

Heino Dwinger, an organic dairy farmer from northern Germany, said "we are very critical of anything related to GMOs (genetically modified organisms) and mass food production.".

His wife Sabrina Schaller added that the couple share this fear as producers and "even more as consumers". The EU and United States — who between them make up 40 percent of global economic output — have held talks for the past year on creating what would be the world's biggest free trade area, hoping to boost growth and jobs on both sides.

Under an ambitious timetable, they aim to sign the Transatlantic Trade and Investment Partnership (TTIP) by the end of the year. Before then they will have to hammer out common rules and regulations on everything from auto safety to banking regulations.

Fears of 'race to the bottom'

Many of the most sensitive disputes in the closed-door talks focus on food and agriculture, where the EU now bans, for example, American beef treated with artificial growth hormones and poultry that has been disinfected with chlorinated water.

The EU also strictly controls GM foods, which have long been widely cultivated and consumed in the United States, amid European concerns about their ecological and health impacts and the corporate ownership of plant and animal DNA.

Many farmers and consumers also fear a softening of environmental and animal welfare standards regulating the conditions for battery hens and livestock reared in industrial scale feed lots.

"At the moment it's possible (in Europe) to encourage farmers to raise animals in good conditions and to produce for the local market," said Hubert Weiger of German environmental group Bund.

"But if the free trade agreement goes ahead, we will be subject to the rules of the global market, and the global market doesn't care about protecting the environment and animals," he said.

"More competition in the meat market will lead to more investment in giant farms," he predicted.

As in other areas, such as data privacy protection, many Europeans fear a transatlantic trade pact will spark a regulatory "race to the bottom", where both sides settle on the lowest common denominator, with the interests of corporations trumping those of consumers.

On the sidelines of the January 16-26 "Green Week", 30,000 protesters marched in Berlin last weekend to demand a greener, cleaner kind of agriculture, and the TTIP was in the crosshairs for many demonstrators.

"The vast majority of people do not want chlorinated chicken, beef with hormones and GMOs," said Jochen Fritz, an organizer of the rally, which was sponsored by 100 environmental, farmers and consumer groups.

European agriculture is now subsidized to the tune of €60 billion ($80 billion) per year under the EU's Common Agricultural Policy, which is driven by a strong political will to protect farmers on the continent.

Many producers know they would not be competitive in a fully open market, among them the dairy farmer Dwinger, who shrugged that "I am a regional producer" who is already struggling to make ends meet.

EU chief negotiator Ignacio Garcia Bercero has promised that TTIP "will not be a deregulation agenda" or lead to lower consumer, environmental, health, labour or data protection standards in either the EU or US.

However, concerns about the pact, including in the food industry, have been fuelled by the secrecy of the talks in Brussels and Washington, which have been held out of reach of TV cameras and journalists' microphones.

Not everyone shares the anxiety, and some European producers hope they will triumph in a liberalized market.

"All this doesn't worry me at all," said Bernd Neumann, a dairy farmer from the eastern state of Saxony. "I think that in Europe we have the highest standards, and that's what will determine who wins in the end."