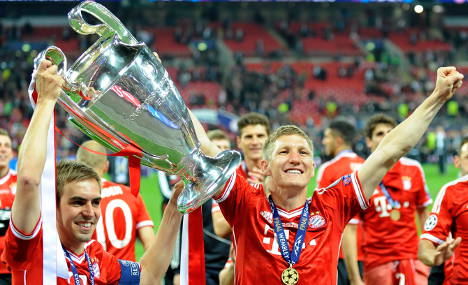 In April it was confirmed that German midfield protégé Mario Götze would make the switch from Borussia Dortmund to rivals Bayern Munich in the summer. The signing prompted criticism from Dortmund fans and neutrals alike who believed Bayern were buying success by pinching their rival’s top player.

The deal, worth €37 million, saw Götze become Germany’s most expensive player – for a few months at least. In September this record was eclipsed by Mezut Özil who moved from Arsenal to Real Marid for €50 million.

Having already wrapped up the league in early April, Bayern went on to clinch the treble when they won the domestic cup competition, the DFP-Pokal, in June.

In June 19-year old Dennis Schröder’s dreams came true when he was signed by NBA side the Atlanta Hawks. Schröder is the first German to be drafted to America’s top basketball league in the first round since his compatriot Dirk Nowitzki.

In July Sabine Lisicki became Germany's latest tennis hero when she reached the Wimbledon final, defeating world number one Serena Williams along the way. Lisicki, who is just 23, became the first German in 14 years to reach a Grand Slam final.

She was dubbed ‘Boom-Boom-Bine’ by the German press – a tribute to the nickname “Boom-Boom-Becker” given to former German star Boris Becker.

In August German discus thrower Robert Harting picked up his third consecutive world title. The 6 ft 7 “ giant ripped off his vest in jubilation when he won gold at the Athletics World Championships in Moscow.

Harting is known for his exuberant celebrations, having hurdled around the track in London when he won Olympic gold in 2012.

Bayer Leverkusen couldn’t believe their luck when they were awarded ‘a goal that never was’ in their Bundesliga victory over Hoffenheim. Stefan Kießling’s 70th-minute ‘phantom goal’ snuck in through a hole in the side netting to seal the 2-1 win in October.

"I had an exchange with Stefan Kießling but nobody, including him, told me that it wasn't a goal,” said referee Felix Brych.

Hoffenheim called for a replay but the German Football Association rejected their appeals.

This year – as always – Germany breezed through their World Cup qualification group. Nine victories, one draw and an impressive goal difference of 26 booked Germany’s place in Brazil.

In a feature before the decisive qualifiers in October, The Local looked back on Germany's history of successful qualification and compared it to England, who rearely make life easy for themselves. This time they sealed qualification in their final group game – by one point.

One of the less straight-forward victories in Germany’s qualifying campaign was their 5-3 away win against Sweden.

It was Germany’s final group game and they had already qualified but there was more than just pride at stake. In the previous group match between the two sides, Joachim Löw’s men had squandered a 4-0 lead to draw 4-4.

This time round Chelsea’s Andre Schürrle bagged a hat-trick in yet another eight-goal thriller.

His successes sparked celebration in his home town of Heppenheim but at several races he was booed by fans who attribute his victories to the car rather than driver.

It’s been a record-breaking year for Bayern Munich. Not only did they break Hamburg’s 30-year record for the longest unbeaten run in the Bundesliga, they also recorded the earliest ever Bundesliga title win.

Bayern Munich, who sit top of the league, had gone the calendar year undefeated in the Bundesliga. They have not lost in 41 league matches and their last Bundesliga defeat came back in October 2012.