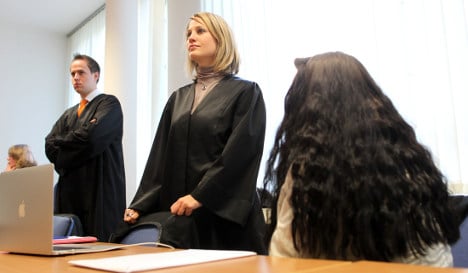 The kidnapping of the only weeks-old baby Michalá in the town of Ústi nad Labem last summer left her mother distraught and feelings in the Czech Republic high.

Police arrested the 48-year-old German woman and her 51-year-old partner just a few days later. The baby was found safe and well at the house of the woman’s mother in Neuwied, Rhineland Palatinate.

The court in Koblenz was unable to untangle the reason why the couple had snatched the baby. Judge Thomas Metzger heard the man say his partner had hidden a stillbirth from him, and told him Michalá was their baby.

She persuaded him they were stealing back their own child, he told the court. But Metzger did not believe this, and called them a “hugely fraudulent couple.”

The pair, who had also stolen several cars and sold them on, were caught last July after being spotted on security cameras driving away from Ústi nad Labem in a car with the wrong number plates on.

The 21-year-old mother of the child had told the court how distressing the entire incident had been, talking in tears of the psychological problems she had suffered since. Her family said they felt the sentences – and the order to pay her €5,000 in compensation – were too lenient.