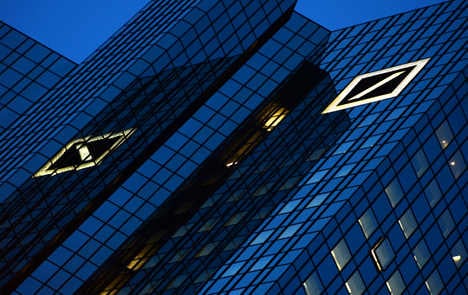 In a statement issued more than a week earlier than markets expected, co-CEOs Jürgen Fitschen and Anshu Jain gave the loss figure, which amounted to €1.2 billion before taxes.

"We expect 2014 to be a year of further challenges and disciplined implementation; however, we are confident of reaching our 2015 targets and delivering on our strategic vision for Deutsche Bank," they said.

It set aside €2.5 billion over the year to address lawsuits by US and EU market authorities over a raft of issues, including the rigging of interbank lending rates and alleged hiding of the risks of US subprime mortgages.

Provisions to respond to litigation amounted to €528 euros in the fourth quarter of 2013. Quarterly revenues were also down 16 percent, it said.

The bank has been hit by a series of probes and litigation.

It has suspended at least seven traders in a scandal over the rigging of interbank lending rates, in which the it received a massive €725-million EU fine.

Last month, it said it had to pay €1.4 billion to settle US litigation related to disclosure problems over mortgage-backed securities between 2005 and 2007.

Japanese police early last month also said they had arrested an employee in the bank's securities arm on suspicion of bribery after he lavishly wined and dined a senior pension fund manager.

In yet another, separate, scandal a number of top Deutsche Bank managers were also suspected of involvement in a tax evasion scheme in the trading of carbon emissions certificates.