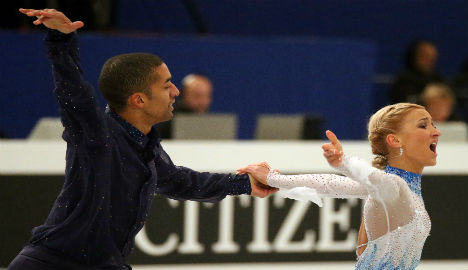 Savchenko, 30, is suffering from "an acute viral infection of the upper respiratory tract," organisers said in a statement.

"She tried it, as everybody could see. She already arrived with it (the infection).

"Our team doctor said if she is pushing through she might be sick for ten days. The second half of the free skating is tough and the risk of injury too high."

Volosozhar and Trankov had opened a comfortable 7.22-point lead on former four-time European winners Savchenko and Szolkowy after the short programme.

Trankov and Volosozhar now look set to lead a Russian podium sweep of the pairs event.

Compatriots Vera Bazarova and Yuri Larionov were sitting third behind the Germans with national champions Ksenia Stolbova and Fedor Klimov fourth after the short.

Savchenko and Szolkowy lost their world title last year to the Russians but won the Grand Prix final ahead of the Volosozhar and Trankov this season.

The Olympic figure skating event gets underway in Sochi with the team competition on February 6.