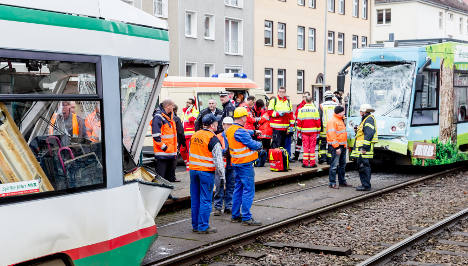 The trams collided at around 11.20am on Friday. Photo: DPA

The 57-year-old driver of one of the trams reportedly failed to brake in time and smashed into another vehicle which was just leaving a station. He was seriously injured, a Magdeburg police spokeswoman confirmed.

Windows shattered and the driver’s cabin crumpled as the tram which was coming into the station collided with the second vehicle with such force that it came off the rails at 11.20am. Blood from hurt passengers could be seen on the floor.

One of the injured included a heavily pregnant woman who was taken to hospital by helicopter.

Apart from the driver, none of the other casualties are believed to be seriously injured. Why the driver failed to stop, when he could see that there was a tram in the way at the Südering station is unclear, the spokeswoman said.

Emergency services assessed the scene and care for those involved. But some passengers were so shocked that they could not leave the tram, remaining silent in their seats.

Some of the injured were treated at the scene while others were taken to a nearby hospital. Police estimate that damages to the two vehicles stand at around €1 million.