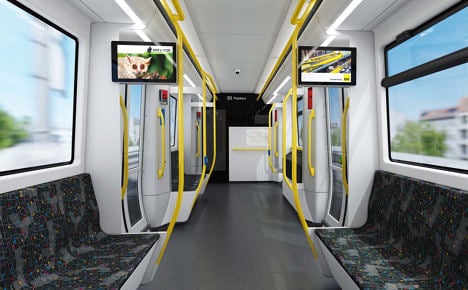 The two new trains were designed to be roomier for passengers, but these extra 10 centimetres of wiggle-room are proving a logistical nightmare, as the trains do not fit in older, narrower, stretches of the underground network.

Safety regulations state that there has to be at least half-metre gap between the train and the wall of the tunnel, in order for people to be able to escape in an emergency, the Tagesspiegel newspaper reported on Thursday.

A section of the U2 line between Wittenbergplatz and Bismarckstraße will be widened, meaning passengers will have to take replacement buses from the middle of August to the end of November during the week after 9pm.

Other lines will be affected but these have not yet been confirmed, the Tagesspiegel said. Tunnels on newer lines such as the U5 and the U9 were built with more room, meaning they can take the new trains.

U-Bahn network operator BVG plans on ordering 24 more of the trains by 2015 – costing around €158 million.

A spokeswoman for BVG said the cost of widening the tunnels was included in the company’s maintenance budget.

She said: “Even without the new trains we would have to rebuild the walls [of the tunnels] because in these places we have already reached the set safety distance," the BZ newspaper reported.