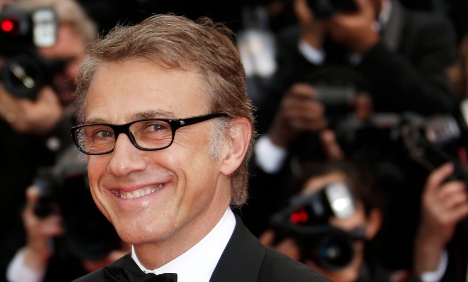 Christoph Waltz pictured at last year's Cannes film festival where he was also a juror. Photo:DPA

Long a well-known face among German-speaking audiences, the softly-spoken Waltz is best known internationally for his parts in Quentin Tarantino's "Inglourious Basterds" and "Django Unchained" for which he won two Oscars.

The jury will be headed by US producer James Schamus. His diverse resume includes the Oscar-winning 2005 cowboy drama "Brokeback Mountain" on which he worked with director Ang Lee, one of a string of such collaborations.

For more than a decade, Schamus led Focus Features and was involved in producing films such as "Lost in Translation," "Milk," "Eternal Sunshine of the Spotless Mind" and "Dallas Buyers Club".

The 64th Berlinale, the first major European cinema showcase of the year, will open on February 6th with US director Wes Anderson's all-star romp "The Grand Budapest Hotel," and wrap up on February 16th.

The international jury hands out the festival's sought-after top prizes, the Golden and Silver Bear awards.

Schamus is no stranger to the Berlin film festival after "The Wedding Banquet", another collaboration with Ang Lee, carried off the Golden Bear in 1993.

"As one of independent cinema's most important champions, James Schamus knows the balancing act between Hollywood's studio system and art-house cinema better than anyone," the festival's organizers said in a statement.

Leung, who appeared in the 2000 hit "In the Mood for Love," also starred in "The Grandmaster," a martial arts epic about the mentor of kung fu superstar Bruce Lee which opened last year's Berlin film festival.

Fellow jury members include US actress and filmmaker Greta Gerwig, Iranian filmmaker Mitra Farahani, Danish actress Trine Dyrholm and Barbara Broccoli, the daughter of "James Bond" producer Albert Broccoli who, on his death, took over their production with her brother.