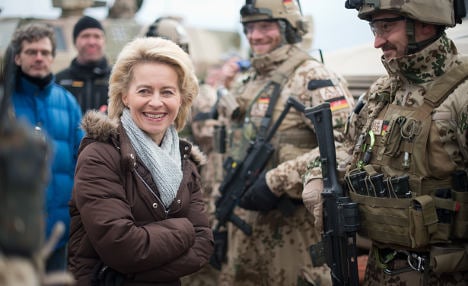 Von der Leyen made an unannounced visit to the country on Sunday.

Ursula von der Leyen, who was appointed a week ago, made an unannounced two-day trip to the northern city of Mazar-i-Sharif to meet German soldiers in the NATO coalition that is now withdrawing from Afghanistan.

The US and other coalition members are pushing Karzai to sign a long-delayed deal with Washington to enable several thousand troops to remain in Afghanistan to train the local security forces and target Al-Qaeda remnants.

"It's important to us that we have a secure legal framework," von der Leyen said. "Therefore we hope that the bilateral agreement between the US and Afghanistan is soon signed by Karzai.

"The ISAF (International Security Assistance Force) mission is coming to an end, but an enormous amount has been achieved here and we want to protect that."

Karzai, who is due to stand down at elections in April, has been in a long and bitter standoff with US officials over the Bilateral Security Agreement (BSA).

The Afghan president first endorsed the deal – which lays out rules for US troops, and would be the basis for other NATO forces – but later said it might only be signed after the election.

NATO's combat mission is due to end by December 2014, 13 years after the extremist Taliban regime was ousted from power.

About 3,000 German troops are deployed in Afghanistan, where the country is the lead nation in the relatively peaceful northern region.

Germany has offered to keep hundreds of soldiers in the country after 2014, without giving precise numbers.

Leyen said that she was pleased to meet the soldiers before Christmas and pledged that they could rely on her support.

If no BSA deal is signed, many observers fear a collapse of the still fragile Afghan forces and a resurgence of the Taliban.