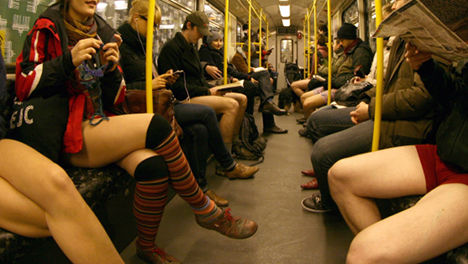 Participants on the Berlin underground on Sunday. Photo: Facebook

Thanks to an unusually mild January, 2014's No Pants Subway Ride (NPSR) drew a modest crowd in cities including Berlin, Munich, Cologne, Stuttgart and Hamburg.

After starting in New York 12 years ago, the flashmob movement has gone global, with people taking part in over 60 countries. In Germany the fun was organized through Facebook groups.

Partakers met at 2pm under strict instruction from the Facebook page to “please be on time.”

The only other rule – no G-strings, especially not of the comedy animal variety.

Part of the fun is appearing not to be aware of one's state of undress, riding the underground as normal. Questions from fellow (clothed) travellers should be ignored.

US theatre group Improv Everywhere came up with the idea, which it says has to be in winter. In the summer, naked legs are far less shocking.

READ MORE: Naked motorcyclist is talk of the town