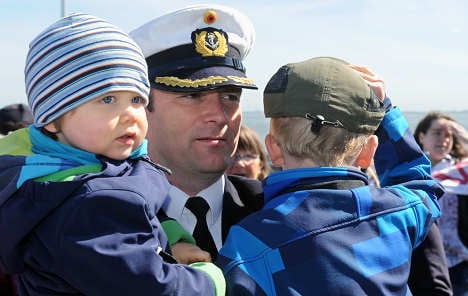 Plans from Ursula von der Leyen to make it easier for soldiers to work part-time and extend childcare were quickly criticized by the opposition Green Party.

The party's defence spokesman Tobias Lindner told the Handelsblatt newspaper that such changes would require funding that is not earmarked in the current budget.

Inge Höger from the far-left party Die Linke said: "There are no part-time wars and no family-friendly military missions.”

"My goal is to make the German armed forces into one of the most attractive employers in Germany," said the 55-year-old, who is Germany's first female defence minister. "In doing so, the most important issue is the compatibility of employment and family.”

She said that widening childcare provision, which Linder said currently cost the army millions of euros, would be one of the first measures looked at.

"We need a flexible system of childcare across the armed forces," she said, calling for the provision of out-of-hours care, before or after the normal working day, beyond that offered by barracks’ nurseries.

She also wants to study the army's system of transferring soldiers every two to three years, she said. "A career in the armed forces must not mean as a rule: always on duty and every few years a move," von der Leyen said.

Viewed as a possible successor to Chancellor Angela Merkel, von der Leyen lost no time in visiting German troops in Afghanistan a few days before Christmas and revealed in the Sunday interview with the Bild am Sonntag that she had been tapped for the job only five days before being sworn in with the rest of the cabinet.

"Attractiveness, and family-friendliness is part of that, is a decisive building block in the realignment of the armed forces," Hellmut Königshaus told Monday's Handelsblatt.

Von der Leyen, who was family affairs minister in Merkel's first cabinet, has been credited with driving social reforms, many borrowed from the centre-left opposition, including expanding childcare and granting new fathers paid leave.

Her comments come amid a debate in Germany about how to better combine family and professional life, as Europe's top economy grapples with an ageing and shrinking population and tries to boost the birthrate and lure women back to work.