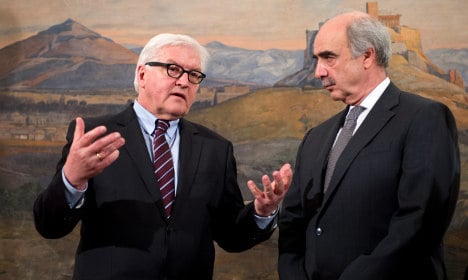 Steinmeier praised Athens for its efforts in clearing up the crisis-stricken national finances. However, he also urged Greek lawmakers to push forward with reforms despite their current dismal approval ratings.

"The work which is being done here is not only a task for Greece but for Europe," said Social Democrat Steinmeier at the start of his visit – his first foreign trip since taking up the post in December. "I've expressed my encouragement for that [work]," he added.

Greece, which in January took over the revolving EU presidency, has spent the last years sunk in a deep financial crisis. The international community has so far ploughed €240 billion in aid into the country, including sizeable contributions from German taxpayers.

Other EU members have expressed fears that the reform drive will be abandoned if Samaras' centre-left coalition government collapses as a result of upcoming European elections in May.

Meanwhile, media reports said on Friday that Germany will soon replace its ambassador to Greece following an attack on the German embassy in Athens by unknown gunmen in December.

Diplomat Peter Schoof, known for his work improving Germany's relations with its EU neighbours, is tipped for the position, which is considered key for German foreign relations in light of anti-German feeling in the country.

If his appointment is confirmed by Merkel's cabinet, Schoof would replace current ambassador Wolfgang Dold, who has been in the position since March 2012.