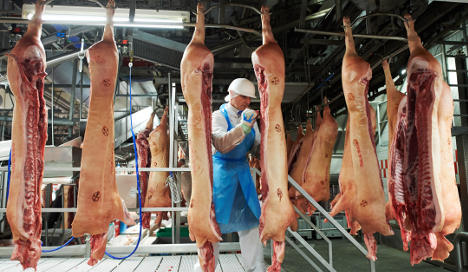 58 million pigs are slaughtered in Germany each year. Photo: DPA

The 2014 Meat Atlas, published by the Heinrich Böll Foundation and the German branch of Friends of the Earth, also claimed that European consumers may be exposed to higher levels of antibiotics in meat, if the forthcoming trade deal between the US and the EU comes to fruition.

Although meat consumption in Germany fell by two kilograms per head in 2012, Germans still consumed on average 60kg per person. The worldwide average is 43.1 kg per year, but is much higher in the developed world at 79.3kg.

To feed this demand, Germany slaughters 735 million animals annually, most of them in highly industrialized production plants.

And it is Germans' hunger for cheap pork sausages and schnitzels that is hitting the headlines with 58 million pigs slaughtered each year – more than any other EU country.

The global pig market is growing at a rapid rate and the demand for cheap pork is coming increasingly from developing countries such as China and India, where the growing middle classes are eating more meat, the atlas said.

However, the spate of recent food scandals in Europe is turning the heat up on producers to make their production more transparent.

Consumers are growing increasingly alarmed and the demand for accurate information has been rising, according to the organizations behind the Meat Atlas.

"The need for information about meat is huge", Barbara Unmüßig, head of the Heinrich Böll Foundation told The Local. “Food scandals are cropping up everywhere, not only in Germany. We need a trend reversal. The way we produce meat needs to change."

And yet if trends continue, the world could be producing as much as 470 million tonnes of meat each year by the middle of the century, the publication said. The current figure is 320 million tonnes. The group argued this increases the need for internationally binding standards on meat production.

But a press conference in Berlin on Thursday heard how global trade deals could put consumers at greater risk. Europeans could soon be eating growth hormones and antibiotics fed to American-bred cattle, the atlas warned.

If the proposed trade agreement between the US and Europe is brought into effect, consumers in Europe might be exposed to the potentially dangerous chemicals used to spur growth and protect animals from disease. These growth hormones are legal in the US, but banned in EU countries.

"Europe [has] banned growth hormones in animal feed for good reason. The health risks for children and young people are far too great,” said Friends of the Earth Germany chairman Hubert Weiger.

The producers of the report have organized a demonstration in Berlin on January 18th to protest against the trade agreement and to increase awareness about international food production.

"It’s our health and the health of our animals at stake", Weiger said.