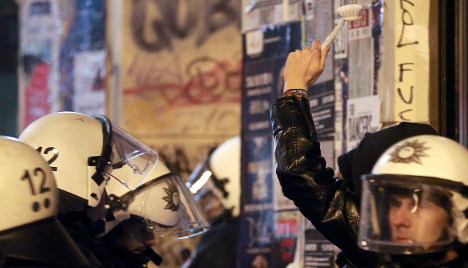 Protesters brought brushes with them to a demo in Hamburg on Wednesday night. Photo: DPA

Police established a restricted zone, Gefahrengebiet, in the centre of Hamburg on Saturday morning, following protests before Christmas and a series of attacks on police officers.

It covers the city’s nightlife area, red light district and old town and gives police extra powers to stop, search and ban people from the area.

But so far it has done little to quell the violence between left-wing groups and the police.

On Wednesday night around 400 people were involved in a cat and mouse game with police around the restricted zone, with some throwing stones at officers. The Hamburg Morgenpost reported several arrests were made on Wednesday night and fireworks were set off.

One passer-by was injured when a stone hit his head and he was taken to hospital. Some of the demonstrators carried toilet brushes. The bathroom cleaning utensil has become an unlikely symbol of the protests after a video was broadcast on Tuesday showing police in riot gear confiscating a toilet brush from a hooded man who had been stopped.

The warning added: “Even demonstrations intended to be peaceful can turn confrontational and escalate into violence.  You should avoid areas of demonstrations or public gatherings, especially in the restricted areas, and exercise caution if in the vicinity of any large gatherings, protests, or demonstrations.”

It advised US citizens traveling or living in Germany to enroll in the Department of State’s Smart Traveler Enrollment Program (STEP) at travel.state.gov.