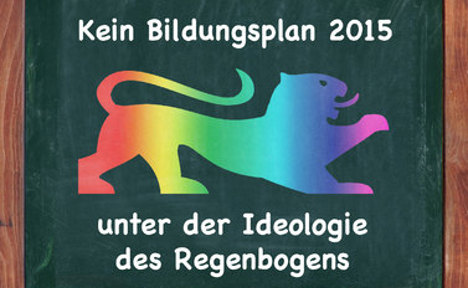 Opponents of the plan have campaigned "against the ideology of the rainbow". Photo: openpetition.de

The petition, which by Thursday had collected over 65,700 signatures, wants to lobby parliament to sink plans in the state of Baden-Württemberg to make teachers talk to pupils more frankly about homosexuality.

The initiative, by Baden-Württemberg’s ruling regional Green/SPD coalition, wants to include "acceptance of sexual diversity" in the curriculum so that children are told about different lifestyles and relationships at a young age.

But it has met strong resistance from teachers and parents.

Supporters say the curriculum change will promote tolerance of lesbian, gay, bisexual, transgender, transsexual and intersexual people. Critics say it would "go beyond the aim of preventing discrimination" to actively promote "the ideology of the rainbow”.

According to the petition, which was launched by a teacher, the plans would see an "educational, moral and ideological re-education of the general school system."

The Greens coalition partners in the state government, the SPD, have also expressed shock at resistance to the plan. "The current online petition contains a spirit of severe intolerance," SPD regional education expert Stefan Fulst-Blei told the FAZ.

Signatories are hoping the regional parliament will take their petition into account when it comes to a debate on the culture ministry's initiative to include "acceptance of sexual diversity" in the 2015 education plan.

The initiative has been quietly criticized by grassroots Conservative politicians from the Christian Democratic Union (CDU), who would prefer sex education in schools to focus on norms and values.

READ MORE: 'We need a debate on homosexuality in sport'