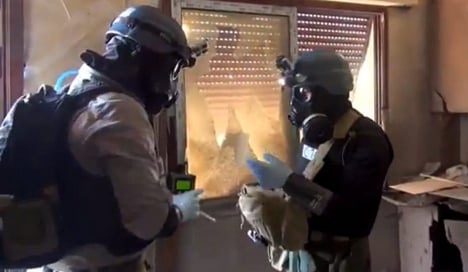 "The government decided following a request by the UN-Organisation for the Prohibition of Chemical Weapons that Germany is prepared to make a substantial contribution to the elimination of Syrian chemical weapons," the foreign and defence ministries said in a joint statement.

"The government is willing and able to destroy in Germany remnants created in the course of irreversibly neutralizing chemical weapons from Syria and which resemble industrial waste."

Last summer the risk of the on-going Syrian civil war spilling over into a wider conflict spiked after the US accused President Assad of using banned chemical weapons in an attack on the capital Damascus in August in which hundreds were killed.

The escalation of hostilities between the US, Syria and its allies was narrowly avoided in September when the Assad regime unexpectedly jumped on a rhetorical suggestion by the US that it could avoid war by disposing of its chemical weapons stockpile.

Since then, UN weapons inspectors have been working on the dangerous and difficult task of locating and securing the chemicals in the middle of a war zone as well as destroying the equipment used to make them.

Germany is the latest country to volunteer to help destroy the toxic chemicals, the US, Norway, Denmark, Finland, Russia, China and Britain have also offered their help.

"After, contrary to the expectations of many, the Syrian chemical weapons were quickly identified, secured and cleared, the community of nations now has an obligation to deal with their disposal," said Foreign Minister Frank-Walter Steinmeier in an accompanying statement to Thursday's announcement.

"No [country] which takes its international responsibility seriously can ignore this," he added.

"Germany has safe and long experience with destruction of residues of chemical weapons," said Defence Minister Ursula von der Leyen. "It makes sense that we bring this capability to the international community and thereby be able to make a valuable contribution to the peace process."

Syria's most dangerous chemicals were meant to have been moved out of the country by December 31st. Under a UN-backed plan, all of Syria's declared 1,290 tonne arsenal should be destroyed by June 30th. But the country's worsening conflict has caused holdups.

Sigrid Kaag, the head of the OPCW, which is monitoring the operation,  said Wednesday that the June deadline could still be met despite delays moving the most dangerous chemicals.

"Everything is ready, investment is made and the authorities have shown that first movements have started to happen," she added, describing the loading of the first chemicals onto a ship in the Syrian port of Latakia on Tuesday as "an important first step."

On top of battles between President Bashar al-Assad's forces and opposition rebels, a customs strike in neighbouring Lebanon and heavy snow in Syria had blocked the delivery of necessary equipment, Kaag said. Containers of Class A chemicals from Syria's arsenal were put on a Danish vessel in Latakia on Tuesday which is now being guarded at sea by an international fleet.

After more chemicals have been loaded, the consignment will be taken to Italy to be transferred to a US Navy vessel for destruction to start. Kaag said an international tender for companies to destroy lower level chemicals in the arsenal would be completed within weeks.