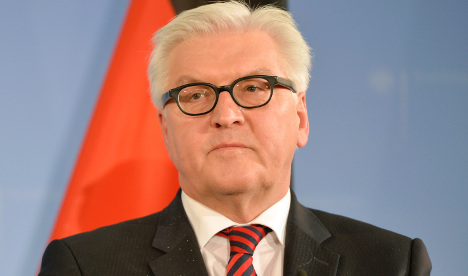 German Foreign Minister Frank-Walter Steinmeier dismissed eurosceptics as "brainless". Photo: DPA
Steinmeier also dismissed eurosceptics, who have gained political ground over the EU debt crisis, as "brainless".
"I am concerned about the situation in our union," he told Ta Nea daily ahead of visit to Greece.
"The crisis in public finances is not over yet… the economic crisis could activate centrifugal political forces that could prove dangerous to the European Union as a whole."
The bloc is witnessing a major rise in anti-EU sentiment over the crisis, which caused a rift between poorer member states requiring bailouts and their richer brethren that have to stump up the cash.
Anti-German sentiment has been on the rise in particular in Greece in recent years over EU paymaster Germany's perceived role in pushing for severe austerity measures in return for the country's €240-billion bailout.
Social discontent is expected to bolster eurosceptics and far-right parties in European parliamentary elections in May.
"We must not avoid confrontation with populists, nationalists, with these brainless people who call themselves eurosceptics," Steinmeier said.
"They all promote anything national without making proposals of their own," he added.
Steinmeier is visiting a day after Greece officially assumed the six-month rotating EU presidency.
His visit also comes after an attack against the German ambassador's residence in Athens in December by unidentified assailants wielding assault rifles. No-one was injured.
"The assailants will not succeed in damaging good relations between Germany and Greece, and between Germans and Greeks," Steinmeier said.
He praised Greece's economic recovery and noted that "for the first time… there are many signs promising Greece's return to growth and more employment".